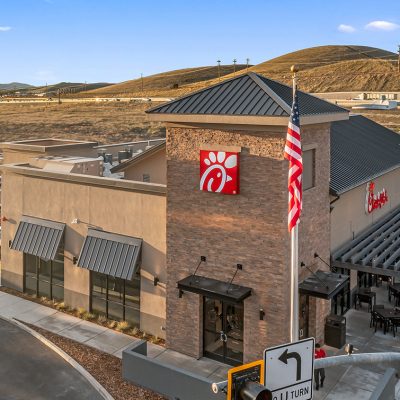 “The sale was a rare Chick-fil-A build-to-suit that featured a 20-year initial lease term and depreciation benefits of owning both the land and building,” says Asher. “We successfully executed a pre-sale marketing strategy and procured and secured a buyer approximately three months ahead of Chick-fil-A formally opening for business and timed the closing shortly after the grand opening.”

The 4,821-square-foot Chick-fil-A-occupied property is located on 1.61 acres at 1754 N. Livermore Avenue. The property sits directly on the Livermore Avenue exit from Interstate 580, one of the most heavily trafficked commuter routes in the Bay Area (214,000 cars per day). Chick-fil-A is adjacent to Home Depot and Walmart in Arroyo Plaza and other major retail in the area including Kohl’s, Target, Ross Dress for Less, T.J. Maxx, Petco, JOANN and Lucky supermarket. There are over 117,500 people with an average household income of nearly $185,000 within a five-mile radius of the property.

“Chick-fil-A is one of the most sought-after single-tenant [quick-service restaurant] drive-thru investments across the country in today’s market, and for plenty of good reasons,” says Asher.

Asher adds, “Although cap rates and pricing have started to adjust in past months due to rising interest rates, single-tenant fast-food drive-thru properties will remain in high demand, retain the best pricing, and represent a flight to security for net lease investors. The sale of the Chick-fil-A in Livermore is a prime example of pride of ownership, trophy acquisition featuring a secure and stable income stream the buyer can rely upon long-term,” said Asher.