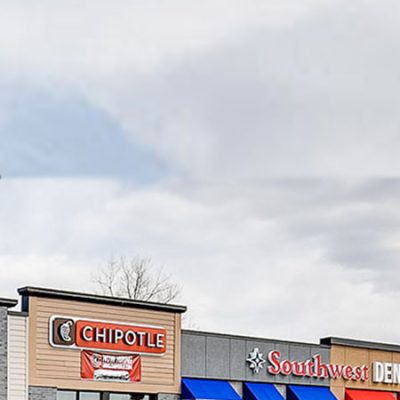 Hanley Investment Group Real Estate Advisors, a nationally recognized real estate brokerage and advisory firm specializing in retail property sales, announced today that the firm arranged the sale of a new, two-tenant Chipotle Mexican Grill with “Chipotlane” drive-thru and Heartland Dental in the Twin Cities metro area, adjacent to Walmart Supercenter, ALDI and Target-anchored shopping centers, which pull from a trade area of over 90,000 people. The sale price was $3,425,000.

Despite the challenges of the COVID-19 pandemic, this transaction represents Hanley Investment Group’s fifth Twin Cities retail transaction this year.

Located in a suburb 27 miles northeast of St. Paul, at 107 12th Street SW in Forest Lake, Minnesota, the 6,812-square-foot building sits on a 1.05-acre pad adjacent to the signalized intersection of Broadway Avenue and 12th Street, with 40,000 cars per day at the intersection. The property is located next to Interstate-35 freeway, a primary north/south freeway that connects Forest Lake to St. Paul and Minneapolis to the south.

“Chipotle is one of the most sought-after quick-service restaurant investments nationwide right now,” said Lefko. “Chipotle has been focused on enhancing its online business by installing Chipotlanes (drive-thrus) that allow for quick digital order pickup. The chain recently announced plans to open its 100th Chipotlane, which is significant because the drive-thrus have proven to contribute to higher check averages than traditional units.”

Lefko added, “We generated six offers in the first week of listing the property for sale, even with commencing all formal marketing in the initial months of the COVID-19 pandemic.”

According to Lefko, the property benefits from a highly successful regional trade area but also from the established, affluent population that lives in Forest Lake and commutes to Minneapolis for work; average household incomes are in excess of $101,000 within a five-mile radius and the number of households has increased by over 40% over the past 20 years.

Chipotle Mexican Grill, Inc. (NYSE: CMG) had over 2,650 restaurants as of June 30, 2020, in the United States, Canada, the United Kingdom, France and Germany and is the only restaurant company of its size that owns and operates all its restaurants. Chipotle recently announced that it is hiring 10,000 workers to manage the new digital business, and even given the pandemic, Chipotle opened 37 new restaurants during the second quarter of 2020.

Forest Lake is part of the Twin Cities metro area, one of the strongest Midwest economies. “The Twin Cities’ gross domestic product is the second largest in the Midwest behind only Chicago and is the 13th largest economy in the nation. It is home to 19 Fortune 500 companies and has a robust job market with strong population growth,” noted Asher.

Lefko and Asher are one of the most active net-lease teams in the Midwest with over $400 million in Midwest transaction volume, many at record-low cap rates and the highest price per square foot. In the last 18 months, Lefko and Asher have sold $52 million in retail properties in the Twin Cities metro area including the sale of a newly constructed, single-tenant Bank of America in Brooklyn Center, near Minneapolis, and the lowest-cap rate multi-tenant property in the Midwest, which featured a Chipotle Mexican Grill restaurant and Starbucks Drive-Thru in Chaska, Minnesota, also near Minneapolis.