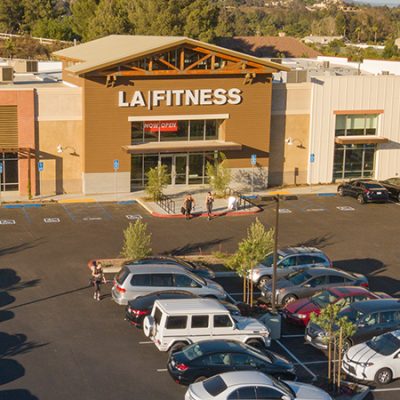 The property benefits from large monument signage, direct frontage on Temecula Pkwy (68,000 cars per day), and its freeway-visible location near the Interstate 15 on/off ramp (176,000 cars per day). The property is an anchor to the Gateway to Temecula, a brand-new lifestyle center that contains approximately 61k sf of commercial space including Starbucks with a 24-hour drive-thru, Chevron and Car Wash, Verizon Wireless, The Pizza Press, and 4k sf of office.

LA Fitness is an American gym chain with more than 700 clubs across the United States and Canada. The company was formed in 1984 and is based in Irvine.

Austin Blodgett and Eric Wohl with Hanley Investment Group Real Estate Advisors represented the seller, a private developer based in Irvine. The buyer, a family trust from Los Angeles, was represented by Richard Lee of R&L Properties-Cerritos Inc of Corona.

According to Blodgett, LA Fitness just executed a brand-new 15-year primary lease term with a number of renewal options. “This is a rare sale of a single-tenant LA Fitness in Southern California. This location has low rent for a new-construction LA Fitness, which is what ultimately got the buyer comfortable paying this cap rate,” said Blodgett. “Four single-tenant LA Fitness investments sold in California in the last 18 months… LA Fitness is the #1 health club in the nation and the most attractive health club investment in today’s market.”

“The Inland Empire market is the second fastest-growing region in California. The five-mile population has grown over 81% since 2000, making it one of the fastest growing submarkets in California,” notes Wohl. “Temecula in its self is booming with development projects like the $300 mil expansion of Pechanga Resort and Casino, a new 1,750-unit master planned community called Altair, and over $24 mil in road improvements to the I-15 Interchange to handle the increase in traffic to the region.”

According to the Global Wellness Institute, the wellness industry is a $4.2 trillion business (2017). It grew 12.8 percent from 2015 to 2017 and is forecasted to grow 6.4 percent to 8 percent in the next five years. To put that in an economic context, from 2015-2017, the wellness economy grew 6.4 percent annually, nearly twice as fast as global economic growth (3.6 percent). Wellness expenditures ($4.2 trillion) are now more than half as large as total global health expenditures ($7.3 trillion). And the wellness industry represents 5.3 percent of global economic output.