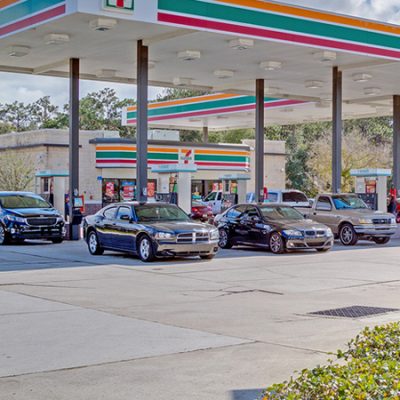 The 1.20-acre property will be occupied by a 3,000-square-foot 7-Eleven convenience store and gas station at the northwest signalized intersection of Jurupa and Citrus Avenues at 16060 Jurupa Avenue in Fontana. 7-Eleven is expected to open later this year.

“We successfully executed a pre-construction sales strategy and secured an all-cash, 1031 exchange buyer through a broker relationship and closed escrow before the tenant commenced construction on the building,” said Asher.

“The new, long-term ground lease format with 7-Eleven provided us the opportunity to arrange a pre-sale structure,” said Asher. “Additionally, 7-Eleven is one of the most highly sought-after national tenants in today’s market due to their credit combined with typically occupying fundamental ‘A’ locations investors feel safe and secure owning long-term.”

The 7-Eleven site is located at a hard corner, signalized intersection with an average daily traffic count of 38,000 cars and is adjacent to multiple distribution centers including Walmart, UPS, and Black and Decker totaling more than 2.6 million square feet. Several high schools are within two miles of the property including Jurupa Hills High School (2,100 students), Citrus High School (1,400 students), and Henry J. Kaiser High School (2,400 students).

The property also enjoys convenient access from four major Southern California freeways and is centrally located between Interstate 10, Interstate 15, Interstate 215, and State Route 60. Nearly 293,000 residents and more than 76,000 employees are within a five-mile radius of the property.

Fontana was designated as the second strongest city with a population of more than 200,000 in the entire country, according to Fiscal Times, and is the second largest city in San Bernardino County.

Earlier this year, Hanley Investment Group arranged the sale of a single-tenant Jack in the Box in Fontana on a pre-construction basis. The new Jack in the Box is located at 17020 S. Highland Avenue, at the entrance of the brand-new Sprouts-anchored Highland Village shopping center.

“The pre-sales of the ground leases for 7-Eleven and Jack in the Box in Fontana, before the tenants are even open for business, affirms the strong demand for high-quality, single-tenant triple-net assets in prime locations,” said Asher. “And, with the limited supply of new properties being built, we expect the trend to continue in the future.”