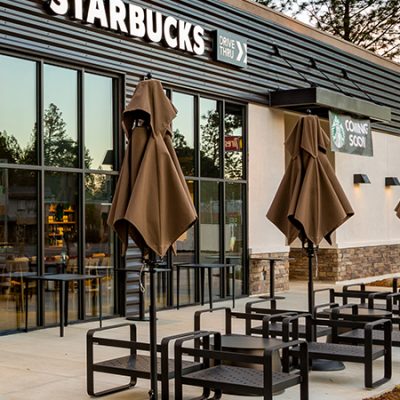 In the city of Ripon in the middle of California’s Central Valley, Hanley Investment Group Executive Vice President Bill Asher and Vice President Jeff Lefko represented the seller in the sale of a brand-new single-tenant Starbucks with a drive-thru for $2,748,500, representing a cap rate of 4.55 percent and $1,773 per square foot.

Built in 2018, the new 1,550-square-foot drive-thru property is located on 0.36 acres at 338 E. Main Street, immediately adjacent to the State Route 99 freeway on/off ramps at Main Street in Ripon. According to Asher, the property benefits from excellent access, a freeway-visible 65-foot pylon sign and approximately 116,000 cars per day at SR-99 freeway’s Main Street exit. SR-99 is the major north/south arterial through California’s Central Valley.

According to Asher, Hanley Investment Group procured an all-cash 1031 exchange buyer and closed escrow at 99 percent of the list price.

In Paradise, California, located in the Sierra Nevada foothills above the northeastern Sacramento Valley, Hanley Investment Group’s Asher and Lefko arranged the sale of a brand-new single-tenant Starbucks with a drive-thru for $2,708,000, representing a cap rate of 4.80 percent and $1,091 per square foot. The property closed at 99 percent of the list price.

Built in 2018, the new 2,482-square-foot drive-thru property is located on 1.21 acres at 6344 Skyway Road, a major east/west thoroughfare in Paradise, the second largest city in the fast-growing and established Chico Metropolitan Statistical Area (MSA). The city of Paradise has a population of approximately 27,000 residents. The Chico MSA, which has a total population of over 229,000 people, has grown by more than 20 percent over the last 15 years.

“The site housed a coffee use for over 15 years before Starbucks entered the market,” said Asher. “The property is the only Starbucks in an 11-mile radius and is the first Starbucks to open in Paradise.”

Both of the Starbucks locations have a café with a drive-thru format, said Asher. “Approximately 60-70 percent of all business for quick-service restaurants come through the drive-thru in today’s market and average Starbucks store sales are approximately 50 percent greater in locations that have a drive-thru,” Asher noted. “It’s a significant selling point and characteristic for these types of properties and a major reason why single-tenant retail investors are paying premiums for single-tenant Starbucks investments.”

Lefko adds, “Starbucks continues to be one of the most sought-after single-tenant retail investments in today’s market because of their ‘A’ credit rating, corporate guaranteed lease and continued progressive business habits to attract and maintain their loyal customer base.”

“All of the transactions are a prime example of the incredible demand for Starbucks and affirms the continued strong attraction for corporate-backed single-tenant net-leased investments in California,” Asher noted.