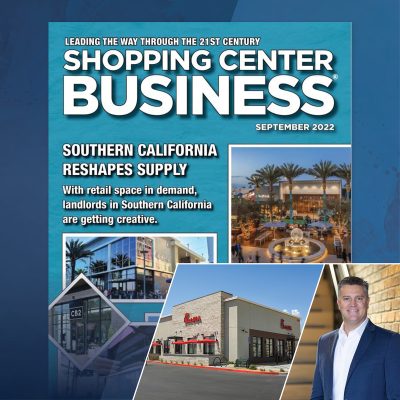 Southern California is seeing new tenants and trends, but there may not be space for everyone.

WHO’S TAKING THE SPACE
In a market like Southern California, there are a good deal of tenants from the local players through international brands that are on the hunt for space. “Given the significant growth we are experiencing in the market with the increase in high-tech- and life sciences-related employment, along with the work-at-home phenomenon that allows people to live wherever they choose, we expect to see demand from retail and restaurant concepts to continue in the near future,” says Todd Star, CEO and managing partner at Star Retail Advisors in Calabasas.  “High costs to build out their locations and high operating costs, including payroll, licensing and taxes, pose challenges but the market opportunity is just too grand to ignore.” On the anchor side, ethnic, discount and smaller-format grocers are seeking space, while many of the big players remain on the sidelines. “Asian grocers 99 Ranch Market and H Mart are filling voids in the market and backfilling traditional grocers,” says Matt Hammond partner at Coreland Companies in Tustin. “They have the advantage of smaller, 20,000-square-foot formats, but can also handle larger, 60,000-square-foot sites as they target niche audiences across Southern California.

These types of anchors are a welcome sight for investors, notes Bill Asher, executive vice president of Hanley Investment Group Real Estate Advisors in Corona del Mar. The firm arranged the $8.2 million sale of a single-tenant Cardenas Markets that is situated within the fully leased Sterling Plaza in San Bernardino in June. The 43,360-square-foot building generated 16 qualified offers and secured a 1031 exchange buyer that exceeded the asking price. The property sold for a 4.74 percent cap rate, a record-low cap rate for a single-tenant Cardenas Markets in the U.S. “As an essential business and daily needs tenant, single-tenant grocery investments have remained one of the most sought-after retail assets in the market,” Asher says. “Investors see a flight to safety and security in the grocery sector.”

Hanley Investment Group recently sold this Chick-fil-A in Palm Desert, California, at a record low cap rate. QSR restaurants are one of the fastest growing tenant categories in Southern California.

“We are seeing more drive-thru-only prototypes and hybrid for-mats with less dining space and a mobile order walk-up pickup window,” Asher says. “Most of the updates come as the result of changing consumer behavior. More than two years into the pandemic, it’s clear that off-premises business isn’t going anywhere. Restaurants have responded accordingly, with slimmer prototypes that sometimes cut out the dining room. Some are cashless, meaning customers can only order through the app or website. This fulfills consumers’ desire for convenience and saves on construction and labor.”

Hanley, along with Progressive, arranged the sale of a new single tenant net leased investment occupied by KFC that features the company’s new “Next Generation Prototype.” The concept prioritizes a digital-forward and contactless customer experience that includes a drive-thru, as well as indoor and outdoor seating. The building is situated on an outparcel to Cardenas Markets in Perris. It sold for nearly $3.8 million in June, representing a 3.65 percent cap rate — a record low for a single-tenant KFC in the Inland Empire at the time of sale.

With reinvention being the name of the game, it stands to reason that we may see more concepts evolve, especially as technology and tastes change. One thing is for certain, however. Southern California’s trendsetting population will likely demand these concepts, so landlords better make room.