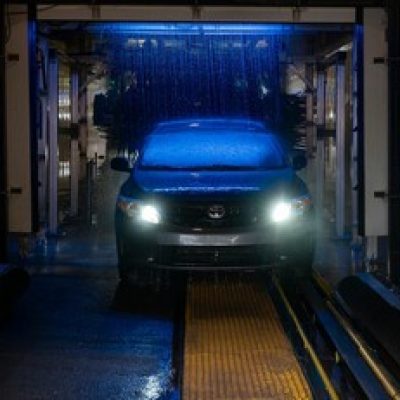 On a warm summer day, a gray sedan approaches the express tunnel at Ultra Car Wash in this Atlanta suburb. The vehicle, recognized by a scanner, passes through a gate and automatically gets treated with brushes, scrubbers and air blasters programmed to the speciﬁcations of a prepaid membership. It emerges minutes later, sparkling in the sun.

The ﬁnancing for this car-wash operation—which services more than 800 vehicles on a busy day—comes from private equity, an industry that has long made headlines buying and selling giant corporations. What most private-equity ﬁrms actually buy are smaller regional businesses, from car washes and dentist offices to auto-repair shops and dry cleaners.

The strategy of buyout ﬁrms, ﬂush with cash and facing stiff competition to invest it, is to bundle these modest businesses—a move known in the private-equity industry as a “roll up”—and ﬁnd new ways for them to make money. The goal is to create bigger, more valuable companies that can be sold down the line for multiples of what they paid.
The car-wash industry has become a hotbed of private-equity activity. Investors are now paying big prices for regional chains—as much as 18-to-20 times earnings before interest, taxes, depreciation and amortization, according to bankers involved in the deals. High inﬂation is testing the durability of the car-wash business model as costs for labor, chemicals and equipment rise. The car-wash industry has touted itself as recession resistant, but there is a worry among some investors that consumers will forgo washing their cars if an economic downturn hits.

Smaller companies have long made up the bulk of private-equity targets even as multibillion-dollar deals garnered the most attention. Buyout ﬁrms owned more than 10,000 U.S. companies as of June 30, up from fewer than 2,000 in 2000, according to PitchBook. Some 80% of those companies are valued at between $25 million and $1 billion, a percentage that remained consistent over the past 20 years even as the industry ballooned.

When leveraged buyouts rose to prominence in the 1980s they offered a simple, but lucrative, formula: Buy an undervalued business using a relatively small amount of cash and a heaping helping of borrowings tied to the cash ﬂows of the business, and then sell it a few years later for a proﬁt.
The more debt a business took on, the higher the potential proﬁt. Buyout ﬁrms became notorious for slashing costs, ﬁring management and cutting jobs to boost cash ﬂows.
But as competition in the industry tightens, that playbook isn’t enough to guarantee a good return—especially when going after smaller businesses. A growing number of private-equity investors now prefer to rely less on debt, let company owners keep sizable stakes in their enterprise and keep employees on staff. This frees up the target to invest in its growth. The private-equity ﬁrms must also make signiﬁcant operational improvements at businesses in order to increase their value.

Car washes held little appeal for private equity until recently. They were primarily cash businesses whose sales ﬂuctuated with the weather and required multiple employees to be on site. When car-wash owners introduced prepaid wash memberships, revenue became more consistent and fewer employees were required to be on site. That made private-equity investors pay attention.

The importance of these monthly subscription packages was on display at the Ultra Car Wash in Lawrenceville. A young employee wearing shorts, black sneakers and a polo shirt stood at one of the entrance gates to the car-wash tunnel and pitched various unlimited memberships to the driver of a black pickup truck.
For $17.99 a month, she explained, the driver could get unlimited washes. For just a few dollars more, he could get his tires shined each time. A bit more would buy him a coat of wax. The top-of-the-line package, which includes all of that plus a ceramic bond to protect the car’s ﬁnish from the elements, was $34.99 a month.

Without a membership, a basic car wash would cost $9.99, so if the driver was planning to wash his truck twice that month, the unlimited membership made sense, she said.

The goal for employees at that location is to get 5% to 10% of customers a day to sign up for a monthly membership, according to district manager Luis Peña.

It is a critical part of the larger business. Thanks to wash-club memberships, Mammoth gets more than 60% of its revenue from automatic charges to customers’ credit cards each month. That means a rainy week doesn’t throw off sales. Having more locations creates incentives for people to sign up for a subscription, making scale more advantageous.

Subscriptions also mean much of the actual car-washing process is automated, which helps boost proﬁts. Subscribers get a radio-frequency identiﬁcation tag for their windshields that lets a machine read which package they have, triggering the right mix of cleaning and chemicals. A typical express wash needs only two employees working at a time, resulting in hefty operating margins of around 65%, excluding rent costs.

Leonard Green & Partners was among the ﬁrst in the private-equity world to recognize how big car washes could be. It bought Mister Car Wash Inc. for $500 million from a unit of Toronto-based buyout ﬁrm Onex Corp. in 2014.

Leonard Green made its name investing in retail but when the economics of traditional retail began to deteriorate, it shifted its focus to businesses that provide services. It saw that Mister Car Wash had better margins than peers because of the high volume of cars that passed through its tunnels, according to people familiar with the deal. It also had low market share, with its 134 locations accounting for only about 2% of the market.

Leonard Green bet that Mister Car Wash could get much bigger. That bet paid off in June 2021 when the private-equity ﬁrm took Mister Car Wash public. The company now has more than 400 locations. Shares have fallen as cost increases pulled down proﬁt margins and investors fretted that inﬂation-conscious consumers would cut back on washing their cars. Still, Leonard Green’s initial $250 million investment is worth more than 10 times that today.

“Roll-up strategies are something private equity has pursued for ages,” said John Richert, head of regional investment banking at JPMorgan Chase & Co. “The reason it took so long to get to car washes is because nobody thought about it.”
Red Dog hopes to replicate that success with Mammoth. Managing Partners Toby Chambers and Tom Connolly, veterans of private equity and deal-making, founded the private-equity ﬁrm in 2018 with the goal of investing alongside business owners.

That same year, they met Gary Dennis and Chip Hackett, Atlanta-based entrepreneurs who founded Mammoth in 2002 and had eight express car washes operating under an assortment of local brands, including Ultra. Messrs. Dennis and Hackett had identiﬁed potential partners but lacked the capital and deal-making expertise to buy them alone.
Messrs. Chambers and Connolly decided to invest, helping the entrepreneurs buy other car-wash businesses as part of the same transaction and giving Mammoth a total of 22 locations. The Pritzker Organization, the merchant bank for the business interests of billionaire hotelier Tom Pritzker, agreed to partner with Red Dog.

Key to the strategy was expanding Mammoth’s existing unlimited wash-club subscription program, crafted by its founders, to all the new locations. The pricing was designed as a barbell with a low price point at the bottom, a high one at the top and a number of more incremental midrange options in between.

“These gentlemen had really mastered the strategy on how to implement and run the club,” Mr. Chambers said.

It also helped that Mammoth’s founders were well connected within the industry, making it easier for the company to recruit others who wanted to sell their businesses. Many people who have sold to them still have a stake in Mammoth; in fact, they currently own about a third of the company. Some are also on Mammoth’s Business Advisory Council, which consults on deal sourcing and integration, site selection and development for new construction, training and supply-chain management.

When Mammoth enters a market, it buys a dominant brand with multiple locations and then scoops up smaller players in those same markets, which it rebrands to match the bigger chain. Its car-wash brands include Swifty, Marc-1, Finish Line, Wiggy Wash, PitStop, Busy Bee, PureMagic and Silverstar, among others. It is also building new locations, which typically cost $4.5 million to $5 million a pop, including land.

The company said it keeps the employees who work at its locations following acquisitions and trains them to use Mammoth’s sales practices and operations systems. For Mr. Peña, who joined Ultra 12 years ago, site manager would have previously been the highest title he could attain. Now he manages multiple locations across multiple brands.

“I started when I was 17 years old,” Mr. Peña said. He said he didn’t think of it as a career at the time.
Mammoth saves money by buying cleaning chemicals and other supplies in bulk. It has centralized customer service, recruiting, training, human resources and back-office functions such as payroll and accounting.

Mammoth’s strategy also involves some ﬁnancial wizardry. While the company pays a relatively high multiple of earnings for its initial foothold in a market, it can typically pay a lower multiple of earnings for subsequents deals because the targets have fewer locations and less sophisticated management teams, executives said. By merging the lower-priced acquisitions with the higher-priced ones, Mammoth effectively lowers the overall price paid for the business. The company also lowers its purchase price by selling its real estate and renting it back from the new owner in what is known as a sale-leaseback.

Mammoth initially ﬁnances new deals using a delayed-draw term loan–a type of loan that lets a borrower withdraw predeﬁned amounts at predetermined times after the total amount has been approved. Its lender, Chicago-based Monroe Capital LLC, is a private-credit provider that specializes in lending to small and midsize businesses, many of which are owned by private-equity ﬁrms.

Once it installs the Mammoth playbook at new locations, it is able to sell the real estate for a higher price than what it paid and use the proceeds to do more deals or fund new development. Car washes have become a hugely popular real-estate play for individual investors, said Jeff Lefko of real-estate advisory ﬁrm Hanley Investment Group, where car-wash deals now account for a signiﬁcant portion of revenue.

“There is no other operation on a 1-acre site that can do $1 million to $2.5 million in sales and pocket half of that,” he said.

Selling real estate and renting it back has enabled Mammoth to continue to expand with no additional investment from its private-equity backers.

“I’ve just never seen a market where you can actually get to some real meaningful scale, and you’ve never put any incremental equity to work,” said Mammoth Chief Financial Officer Jennifer Vanderveldt, who joined the company in May. “You can actually pay yourself.